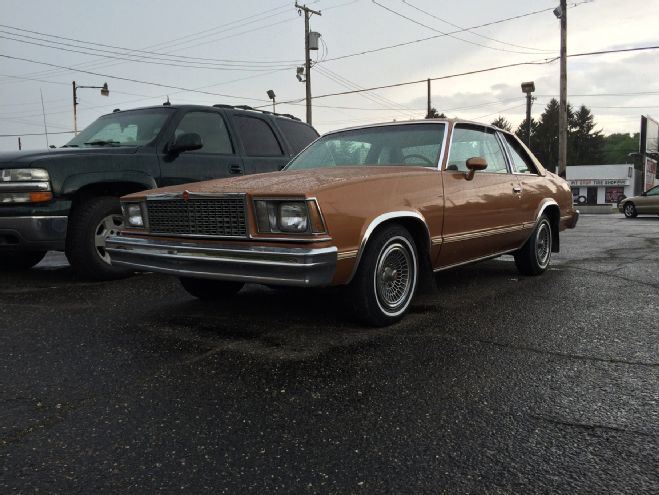 HotRod is getting on board the G-Body train, baby! Check out this first part of what looks like a series where they’re taking a merely-meh Chevy Malibu and doing, well, something with it. We’re not quite sure what, only that they’re dropping a 350 in and running across country.  Sounds like fun to me.

About it’s orange-brown exterior: “It’s weird looking, but I guess it’s ok for the ‘70s. You should hang a disco ball from the roof. I asked and thankfully, he doesn’t think of me as a product of the ‘70s, after all I was just 6 years old when the car was built and never had the opportunity to don a pair of bellbottom jeans.

Oh come on. At least it isn’t Harvest Gold or something.

Update: Here’s the rest of the story! I won’t spoil it for you… lets just say its well worth the read….

By the time I got to my son Danny’s house about 15 miles away, it was clear that the brakes weren’t working right. The master cylinder was leaking past the rear seal. I found a replacement Friday evening at an AutoZone in Akron, and it was an easy fix that night. Saturday’s mishap, however, would leave us stranded on the road.

Feeling across the tread of the rear tires, I discovered a bulge forming in the center of the tread on the right rear tire, indicating that the tread was separating from the rest of the tire. Neither Costco, nor any of the other tire stores in the area had any 195/45R-14 tires in stock. Of course, the space-saver spare in the trunk was flat. Someone at the tire store filled it up for me, but when I used the stock bumper jack to lift the car up, it began to pull the bumper off the mount.

In the last installment, we arrived back at Danny’s house in shame with the Malibu on the back of a flatbed, having only made it 120 miles before running into problems we couldn’t fix. Four new tires, a new radiator, and a new master cylinder and we were back on the road, though several days late.