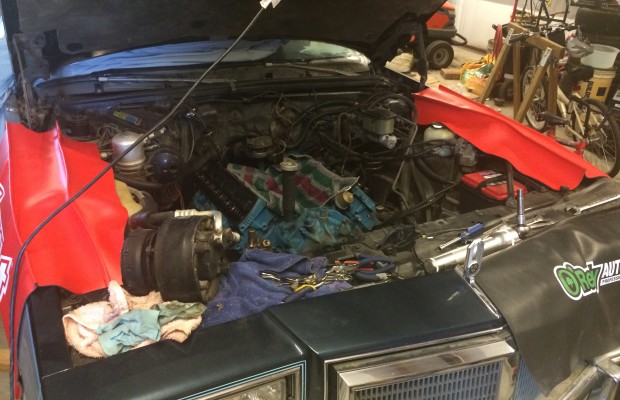 Well, here we are, back at “The Grey Car,” my 1981 Pontiac Grand Prix Brougham.  Like I said in the Introduction post, she’s been in my family since well, roughly 1985 or so.  She started life as a diesel car with an automatic transmission, went through several different Oldsmobile engines (since they share the same basic layout as the Olds-block diesel) including a few 455’s, until the current 403.  Around 1989 we put a Borg Warner 5-speed from a 1979 Cutlass in there, and when first gear went out (and we couldn’t get parts for it) we swapped in a 4-speed Saginaw from a 1979 Grand Am that we had parted out a few years earlier (it was a true “Flintstones” car, if you know what I mean…)

That was 1996.  Flash forward past a regular soap-opera of epic proportions (really) to today.

Now here I am again, in a weird case of deja vu, pulling the engine from this bay yet again.  You can read the reasons in the Intro post.  Suffice it to say, that hopefully the engine is fine and I can just pretty it up and put it back in, after cleaning up the bay to a decent level of “show quality.” Whatever that means.

It’s been an interesting trip getting this to where it is.  A lot of these bolts I remember tightening.  Long, long, ago.  They weren’t quite as rusty then.  Some I have no idea how we did it (I have slept once or twice) and a few, like this infernal clutch Z-bar, I really have no idea how we did it.  All the bolts are inaccessible unless you’re a contortionist.  Which I’m not.

I had to stop because its been infernally hot here.  This photo of the thermometer in my shop tells the tale.  Yep, its pushing 105°F in there.  So I stopped.  Then I had to focus on this website! Argh. I need a clone.

…then its one last check for clearance and connections, and its time to jack that puppy on out.

I do have some video shot, but since I’ve been working on getting this site launched, I haven’t been able to get it edited and published.  It’s coming.  Until then, enjoy these photos of the carnage. 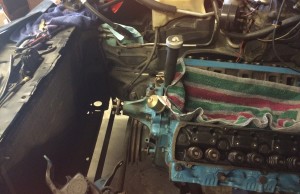 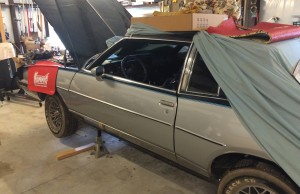 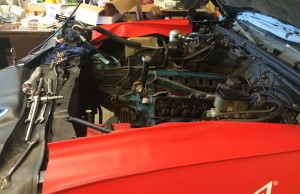 Side view of the engine bay. 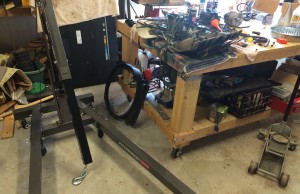 Some of the removed parts littering the table and floor. 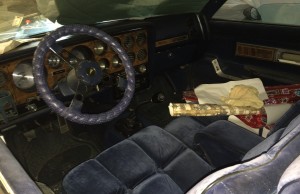 The most exposure the interior’s seen in forever! 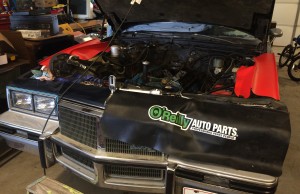 Have to be careful not to mangle up my header!

I've been in a G-Body in one way or another since they were new. I got my own '79 Cutlass in 1990, and have been a fanatic ever since. In 2005 I started GBodyForum, and now GBodyNation.
Related Itemsenginefeaturegrand prixgrey caroldsmobilepontiacproject car
← Previous Story True Survivor: 1983 Grand Prix LJ
Next Story → Grey Car Update: On The Stand