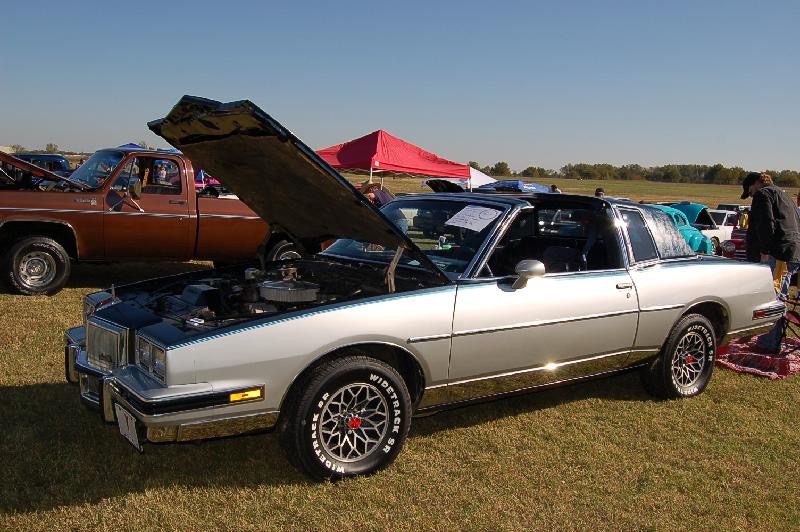 So this, apart from the ’79 402 Big Block Factory 4-speed Malibu wagon my dad also constructed back in the 80’s, during my so-called “formative” years (explains a lot!), was the big reason I started GBodyForum in 2005.  Meet my 1981 Pontiac Grand Prix Brougham, aka “The Grey Car.”  I bought the car from my dad in 1996.  He bought it in 1984 or 1985, ripped out the greasy noisy useless diesel, and from there it had a slew of different engine and transmission combos, from hopped up Oldsmobile 455’s, to the Oldsmobile 403 that’s in it now, paired with various automatics, a soon-thrashed ’79 Cutlass 5-speed, and the current ’79 Pontiac Saginaw 4-speed.

It’s been nearly destroyed by hail (pics for another time!), only to have a lengthy and expensive sheet metal, paint, and vinyl top restoration.  After a five year hiatus for that ordeal, I got the car back in 2005, cleaned up the interior, fixed the sagging headliner, took care of a few other things and spruced up the engine compartment….

…. then in 2010 I stuck the throttle wide open on a straightaway.  When you put that clutch pedal in and hear WAAAAAAAAAAAHHH and the tach goes WAY up, you panic.  I dumped the clutch again, only to have the thing take off.  I shut it down, turning the key all the way and locking the wheel.  Brain lock!

Thankfully I figured it out in time, steered it back onto the road, and coasted her into the driveway. (Lucky for me this was right near the house!) Popped the hood, unstuck the throttle linkage, and there’s coolant bubbling out between the heads and the block and the intake.

She started up, cooled back down, and went into the shop.  For a couple of years.  Really.  You know how this goes.  “I’ll get to it next month. It’s 100º out there. I’m beat. blah blah.”  One of our cats got sick, crawled in through the open window, and died in the back seat floorboards.  I kid you not.

Flash forward a couple more years, and I finally decide to change the head gaskets, and the rest.  Bolts snap off in the Edelbrock intake. Well, sh*t. Order new manifold because I don’t feel like messing with it.  After fighting the sludge and nearly 30 year old head bolts (and messing up my shoulder) I manage to get them off.  Only to find the block disintegrating around the guide pins.

I spray everything down with some oil and think, “yeah, I’ll get back to this later. My shoulder is screwed up, and now I’m pissed.”   I go to heft the heads back on there, and as I set it down, I see something that looks like a gash in one of the cylinders.  Clunk.  The head goes on.

I walk away, hands in the air, wondering if I’ll ever get back to it…..

Now here we are in 2015.  It’s been sitting again for a couple of years.  Spiders have made the undercarriage home.  The tires are pushing 10+ years old with only a couple thousand miles on them.  Dust covers everything.  I’m starting a new G-Body Magazine.

As a kid growing up, this was “the grey car.”  We spent far too many hours swapping engines in this old girl.  Now its ready for something.  Whether the 403 is salvageable I know not.  I know we’re going to find out.  I just have to get her uncovered, and get this engine out, on a stand, and torn apart to see how bad its going to be.

Now, you too shall know her as “The Grey Car.”  Stay tuned!

Chrishttps://GBodyNation.com/
I've been in a G-Body in one way or another since they were new. I got my own '79 Cutlass in 1990, and have been a fanatic ever since. In 2005 I started GBodyForum, and now GBodyNation.

GBodyNation.com is all about that G-Body life. From 1978 to 1988, General Motors made a series of cars that weren't all that great (with a few exceptions) but we grew up with them, and we love them anyway. The G-Body is probably one of the most versatile and widely customizable platforms out there since the 55-57 Chevrolet... For more G-Body greatness, be sure to visit:
GBodyForum.com
MalibuRacing.com
Oldspower.com
and for more GM discussion: BBodyForum.com, and SquareBodyForum.com